The Devil's Circus (Table of Contents) 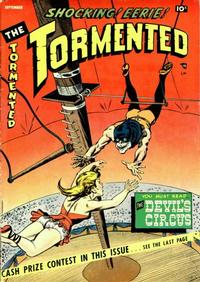 Design For Death (Table of Contents: 2)

The Devil's Circus (Table of Contents: 4)

The Lady in Black (Table of Contents: 5)

Prose story with an illustration; data for this story supplied by Frank Motler, July 2005.

The Face On the Floor (Table of Contents: 7)

Genre
horror-suspense
Characters
Cyrus Madden
Synopsis
Cyrus is a janitor who hates it when people dirty up his nice clean floors.

[Smokers! You Are in Danger of Getting Lung Cancer or Heart Disease!] (Table of Contents: 8) (Expand) /

Genre
horror-suspense
Characters
Ed Engels; Roberta Engels
Synopsis
Roberta and Ed go on a camping trip for their honeymoon. While Ed is away, Roberta is attacked and raped. In a nearby town, Roberta points out her attacker and Ed kills the man. However, on their next stop, Roberta points out ANOTHER man as the rapist and demands Ed kill him. Ed realizes his wife has gone insane.

The plot of this story is virtually identical to the story "Revenge" by Samuel Blas, which appeared in Collier's Weekly, January 11, 1947, and was adapted to an episode of the "Alfred Hitchcock Presents" television show in 1955.

[Get Your Share From the Horn of Plenty] (Table of Contents: 12)

A contest for the readers to submit which story they liked best. Entries must be postmarked no later than October 1, 1954.