This issue is a variant of Avengers Assemble (Marvel, 2012 series) #1. There exist further variants:

This variant was one of several retailer exclusives for this issue that prominently promoted individual outlets. Two customized cover styles were distributed amongst several stores and conventions; one by Mirco Pierfederici and the other by Khoi Pham. A minimum print run of 500 copies, but possibly more according to individual retailer orders, exist for each custom promo variant. 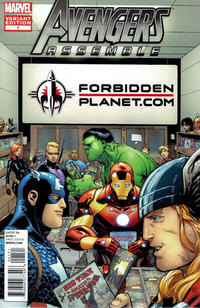 [Credits and Indicia] (Table of Contents: 1)