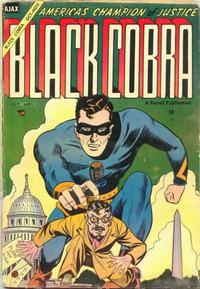 Ace Spy Smasher / The Voice of Treason (Table of Contents: 1)

Scourge of Evil / The Case of the Confused Crooks (Table of Contents: 2)

Genre
superhero
Characters
Black Cobra [Steve Drake]; Debbie; Dr. Sykes; Joe (villain); Louie (villain)
Synopsis
In order to prevent a trio of crooks from getting it, FBI agent Steve Drake injects himself with Formula Alpha, a serum invented by Dr. Sykes which enables a person to go without sleep for a week or longer. After switching to his alias Black Cobra, he captures the crooks, enabling Dr. Sykes to be ushered to the Pentagon where he will explain his formula to the military.

Assignment: Manhunt! / Only the Vile Die Young! (Table of Contents: 4)