The Spider Man! (Table of Contents) 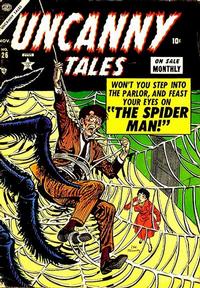 Job Number
F-218
Genre
detective-mystery
Synopsis
When a man commits robberies and fingerprints and eyewitness accounts don't jibe with the individual the police apprehend they are surprised to discover that the criminal they are pursuing is a pair of dwarfs which take turns standing on each other's shoulders under a disguise.

Those Who Doubt (Table of Contents: 2)

The Spider Man! (Table of Contents: 3)

Job Number
F-212
Genre
science fiction
Synopsis
A professor realizes that planets are actually eggs and eventually the creature growing in the Earth's core will hatch destroying all life upon the surface of Earth.

Letters: Ayers often lettered his own work at Atlas/Marvel prior to ca. 1964.

Job Number
F-162
Genre
science fiction
Synopsis
A conman from the future exchanges diamonds for uranium with a man in the past who owns low grade uranium mines. The future man wants the stuff because, as it moves forward in time, it becomes a better grade of uranium. When the diamonds go backward in time, however, the mine owner realizes he's been cheated as he winds up with lumps of coal.

Job Number
F-238
Genre
science fiction
Synopsis
Invading Martians take advantage of a newspaper writer who turns in a hoax story about a flying saucer landing to use his home as a forward base since no one will believe anything he tells them. They tell him all their invasion plans because they know no one will believe. He sees a headline about a hydrogen bomb test in the desert, so he prints a story about the invading Martian fleet traveling through the desert and they take his route figuring no one will expect an attack from that route and are caught in the bomb blast.

Pencils and inks credits from Chris Brown (confirmed by Doc Vassallo and Dave O'Dell) on 2 January 2005.