The Phantom Superman! (Table of Contents) 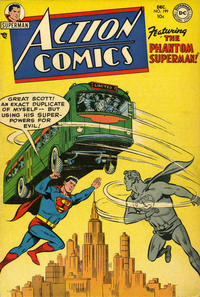 The Phantom Superman! (Table of Contents: 2)

Genre
superhero
Characters
Lex Luthor
Synopsis
Luthor creates a duplicate of Superman composed of duplicate atoms. Luthor then sends the duplicate to cause disasters and help criminals. Superman discovers the duplicate is not a robot and realizes that Luthor must be behind its creation. After battling the duplicate until its power runs out, Superman trails the energy source back to Luthor and destroys the machine responsible for the creation of the duplicate.
Reprints

Woolfolk credit from Martin O'Hearn at http://martinohearn.blogspot.com/. Synopsis by Darkmark.

The Interplanetary Bank! (Table of Contents: 6)

Binder's records indicate he wrote another Tommy Tomorrow story in 1954 but was unsure what issue it appeared in. This could be a re-titled script (Binder lists the story as "Living Money"). Info per Nick Caputo, culled from Bill Schelly's book Otto Binder The Life and Work of a Comic Book and Science Fiction Visionary.

Death on the Highway (Table of Contents: 10)

Genre
non-fiction
Synopsis
An article about some of the safety precautions used on highways.

School for Hunters! (Table of Contents: 11)