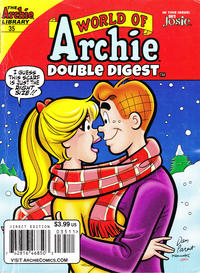 Genre
teen
Characters
Archie Andrews; Fred Andrews; Mary Andrews
Synopsis
Hearing that a snowstorm is on the way, Archie and Fred get supplies ready for the snow, only to learn later that the forecast has been changed.
Reprints

What a Seat-uation (Table of Contents: 4)

A Chip Off the Old Block (Table of Contents: 6)

The Mechanic (Table of Contents: 7)

Genre
humor; teen
Characters
Josie; Melody; Pepper; Albert; Alexander Cabot III; Alexander Cabot II
Synopsis
During a particularly cold winter, Alex whisks the whole gang off to the Cabot family's desert resort. Josie and Pepper like being away from the cold, but there's one disadvantage: in warm weather, Melody doesn't need to cover up, and with Melody in bathing suits, no one's paying any attention to them.
Reprints

Genre
humor; teen
Characters
Josie; Melody; Pepper; Albert; Alexander Cabot III; Alexandra Cabot; Alexander Cabot II
Synopsis
Alexandra helps Albert do his homework using the Cabots' new computer. Alex and Josie scramble the computer's wires so it'll give the wrong answers to the chemistry problems. But the formula the computer comes up with enables Albert to create real diamonds out of nothing.
Reprints

Genre
teen
Characters
Jughead Jones; Miss Grundy; Archie Andrews
Synopsis
Jughead wants to know why his composition is due the next day.
Reprints

Genre
teen
Characters
Hiram Lodge; Smithers; Fred Andrews
Synopsis
Mr. Lodge discovers that Veronica is not in her bed at midnight and calls Fred, convinced that it is Archie's fault.
Reprints

Superintendent Stone could be named after Chic Stone and might indicate that Chic Stone inked this story even though Bob Smith is credited in the digest.

To Right a Wrong (Table of Contents: 24)

She Was a Teen-Age Snob (Table of Contents: 27)

Genre
teen
Characters
Betty Cooper; Veronica Lodge; Hiram Lodge; Mr. Weatherbee
Synopsis
Veronica gets a lesson in humility after she tells Mr. Weatherbee that he'll have to get an appointment with the company secretary before he can talk to her father.
Reprints

The Shopper (Table of Contents: 30)

Illustration used as the title page for the next section featuring Mad House Glads reprints.

The Miracle (Table of Contents: 36)

Genre
teen
Characters
Archie Andrews; Mr. Weatherbee; Miss Grundy
Synopsis
Mr. Weatherbee asks Archie what he would like to be when he grows up.
Reprints

[Sabrina Secrets of a Teenage Witch] (Table of Contents: 48) (Expand) /