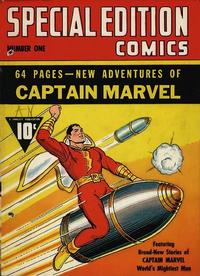 [The Menace of Dr. Allirog] (Table of Contents: 1)

Genre
superhero
Characters
Captain Marvel [Billy Batson]; unnamed boxing champion; President Franklin D. Roosevelt (cameo); Slaughter Slade (villain, boxer); Butch (villain); Dr. Allirog (villain, scientist, giant gorilla, death); Spider (villain, Allirog's assistant); Professor Universe (villain, master of all knowledge)
Synopsis
Billy is stunned, like the rest of the crowd, when the challenger in the heavyweight boxing match knocks out the champion with one punch. By hook or crook, trying to get an interview, Billy learns the truth behind what happened and is captured by a giant ape who is actually Dr. Allirog, who works for Slaughter Slade.
Reprints
Keywords
Shazam; Station WHIZ

The Haunted House (Table of Contents: 2)

Genre
superhero
Characters
Captain Marvel [Billy Batson]; J. Morton Grood (eccentric bachelor-millionaire, flashback, death); Ricketts (Grood's servant, flashback); Police Chief Noble; Spencer Barnes [aka J. Morton Grood] (villain, town treasurer); Ralph Cole (villain)
Synopsis
In 1890, a recluse millionaire, with his dying breath, informs his servant that no one is to enter this house after his death. Anyone doing so will fall under the dying man's curse that will follow them to their grave. When the man dies, the city wants to take the property on back taxes, tear it down and sell the land, but ghosts haunting the property scare everyone off, except Captain Marvel.
Reprints
Keywords
Shazam

Beck, in a page by page anaylsis of this story (printed in Alter Ego #129 (November 2014), specifically states that Parker wrote the story, he (Beck) did the layouts and all figures, while Costanza supplied most of the striking backgrounds. Credits above revised to conform to this statement.

Gamblers of Death (Table of Contents: 3)

Inker revision from Beck to Costanza, per P. C. Hamerlinck, in Alter Ego #126 (July 2014) and added by Craig Delich. According to the article, this story was the FIRST Beck-Costanza art collaboration.

Genre
superhero
Characters
Captain Marvel [Billy Batson]; unnamed President of the National Insurance Association; Beautia Sivana; Dr. Thaddeus Bodog Sivana (villain); Herman (villain)
Synopsis
Billy seeks to learn why there has been ten times as much damage by tornado, earthquake, hail storms, and floods than the previous year, disasters that threaten to bankrupt American insurance companies. However, when he learns that one company in particular has benefitted greatly from these disasters, Billy smells a rat and it's Captain Marvel who discovers the truth and the man behind it: Sivana!
Reprints
Keywords
Shazam; Station WHIZ; World Realty Company