The Test of a Warrior! (Table of Contents) 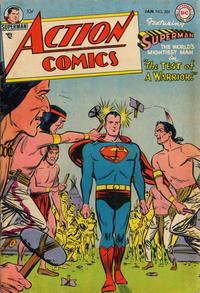 Tests of a Warrior! (Table of Contents: 2)

Genre
superhero
Characters
Superman; Lois Lane; Jimmy Olsen; Perry White; Morwatha (villain); Hun-Sha
Synopsis
The son of an Indian chief asks for and receives Superman’s help in getting his father to pass a series of tests set up by an evil medicine man.

Synopsis by Darkmark. Story is a re-working of a TV script that appeared as episode #58 of "The Adventures of Superman" circa 1955, but filmed in 1954.

The Human Circus! (Table of Contents: 6)

First Line of Dialogue or Text
I'll go to the dance with you Friday night, Jerry...
Genre
humor

First Line of Dialogue or Text
Now, Tommy, I want you to do at least an hour's homework...
Genre
humor
Reprints

First Line of Dialogue or Text
Come on, Pete. It's time for bed!
Genre
humor

The Man Who Doomed Whiskers (Table of Contents: 12)

Bombo, Killer of the Jungle! (Table of Contents: 13)