Upc code on back cover; only one artist's cover due to Photo Cover Month at IDW for certain IDW titles
This issue is a variant of G.I. Joe: A Real American Hero (IDW, 2010 series) #173. There exist further variants:

rough pencils of Cover B 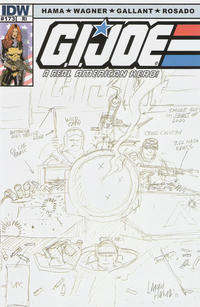 Genre
war; adventure
Characters
G.I. Joe [Snake-Eyes; Flint; Lady Jaye; Wildcard; Cross Country; Steeler; Cover Girl; Sneak Peek; Dusty; Law; Order]; Storm Shadow; Russian Arashikage clan; Oktober Guard(former) [Daina; Malyenkiy; Col. Chikatilo]; Emir of Benzheen; Billy (dead); Cobra [Cobra Commander; Darklon]
Synopsis
Snake-Eyes and Storm Shadow return Billy's dead body to Cobra Commander and ask him to look into the Blue Ninjas as they plan an assault on them. Sneak Peek visits his mom at a nursing home. Lady Jaye and Flint have a discussion over his actions to save her, while Darklon looks on in disgust. The Joes and members of the defunct Oktober Guard are testing their best tanks in Benzheen for the Emir to buy, and are interrupted as they're given word of an incoming invasion from Trucial Abysmia by surplus H.I.S.S. tanks of various models.