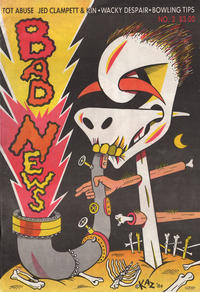 Accompanied by a illustration titled "Medical Histories", which is composed of a series of skeletal x-ray images and mock "medical histories" of the artists

First Line of Dialogue or Text
The Hotel Scumbag, 2:26 a.m. Shakey Sheke was getting ready for bed when he heard a pounding coming from the room next door.
Characters
Shaky Sheke; The Treacherous Tot; Crazy Lady
Reprints

Accompanied by a small-size inset roadrunner photo by Cruickshank from the National Audobon Society.

The Bugs (Table of Contents: 7)

Five cartoons- "Keep your eye on your work.;" "I'm a pickpocket, your honor!;" "Everytime your father gets in the tub, the phone rings!;" "I like this much better than a broom!;" "How should I know what he's got in there?"

From Hooterville to Eternity- The Situation Comedy of Paul Henning (Table of Contents: 10)

Text from "Demographic Vistas" (Univ. of Penn. Press, 1984). Accompanied by approximately twenty-four Friedman portrait illustrations, all small-size except for one.

An ad for the legendary NYC club

Dwayne and Margot- A Bedtime Story (Table of Contents: 14)

Here's a Whole Treasure Chest of Fun from Independent!! (Table of Contents: 15) (Expand) /

Text from Graham's "Bowling Secrets of the Stars" book (1962) accompanied by small illustrations from Mariano. Also includes a poem by Head titled "I Got Bowling on My Mind!!"

How to Housebreak Your Dog (Table of Contents: 20)

First Line of Dialogue or Text
After his home was ravaged by fire- the Tot decided to spend the night in the city cemetery.
Characters
The Treacherous Tot; The Nightwatchman

Includes an inset of a Machamer cartoon- "Now don't forget- I'm to get my regular pay and vacation pay and a bonus for spending my vacation here at the office!"

Ad for the now-defunct NYC club