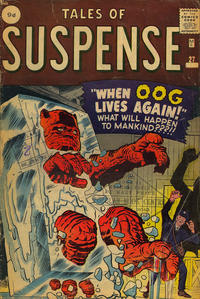 Job Number
V-515
First Line of Dialogue or Text
The Arctic! A vast frozen wasteland...
Genre
science fiction
Characters
Oog; Charlie; Ben
Synopsis
An alien trapped in ice is freed and mocks the fearful humans as it waits to be rescued. "Invade you? You have nothing we want! We should quarantine you!"
Reprints
Keywords
Arctic

From Outer Space (Table of Contents: 2)

Job Number
G-715
First Line of Dialogue or Text
It had been expected for a long time, so it wasn't too much of a...
Genre
science fiction
Characters
Jonathan Ditmar
Synopsis
When hostile aliens come to Earth of the future they are persuaded not to enslave humanity because of Earth's music.
Reprints

On the Trail of the Witch! (Table of Contents: 3)

Job Number
V-516
First Line of Dialogue or Text
In a dark, dank cave somewhere in the lonely hills of...
Genre
fantasy-supernatural
Characters
Inspector Koraz
Synopsis
A witch is fearful of being pursued by a witch-hunter, but it turns out her fears are groundless as he is also a witch.
Reprints

Job Number
V-517
First Line of Dialogue or Text
Ever since the year 2000, there have been robots on...
Genre
science fiction
Characters
Prof. Blake Burke; John Doe
Synopsis
An inventor creates a humanoid robot and treats it like a close friend. When the robot sacrifices itself to save him from a bear, his friends realize that the inventor is also a robot.
Reprints
Keywords
robots

First Line of Dialogue or Text
He called himself the Great Nero, but the audience called him a flop!
Genre
horror-suspense
Characters
Joe Cooke [The Great Nero/Merlin the Mystic]; Merlin
Synopsis
An untalented magician who takes the name Merlin is visited by the spirit of the real Merlin in the form of a derelict and offers to teach him some tricks. When the man learns Merlin's last trick of completely disappearing, he stiffs Merlin his fee. Merlin tells him that he'll be sorry and is the last to depart the theater after the magician uses his disappearing trick and is never seen again.
Reprints

If this story were in Marvel continuity, the Merlin that appears here could be the real Merlin or one of his various imposters.