Kraa the Unhuman! (Table of Contents) 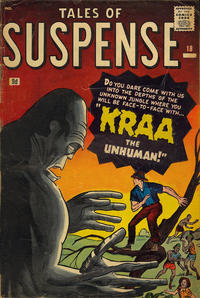 Job Number
V-178
First Line of Dialogue or Text
In almost every man's life there is a fateful turning point!
Genre
science fiction
Characters
Kraa (introduction, origin); Wabuzi tribesmen
Synopsis
An American teacher investigates the mysterious statues made by one tribe in Africa, and finds that they worship a native mutated into a monster by a Soviet atomic test. The teacher soothes the man's pain with ointment, but before the American can get him to a hospital he dies protecting his helper from a python.
Reprints
Keywords
Africa

The Money Tree (Table of Contents: 2)

Job Number
G-977
First Line of Dialogue or Text
All was not as peaceful as it seemed in the Anderson household.
Genre
fantasy-supernatural
Characters
Billy Anderson; Tom Anderson; Amy Anderson
Synopsis
A young boy's father scoffs when his son tries to grow a money tree, but the world is astonished when he succeeds.
Reprints

Job Number
V-180
First Line of Dialogue or Text
It's evening... We're at the rear of a theater...
Genre
fantasy-supernatural
Characters
Pied Piper; Brigitte; Igor
Synopsis
A mysterious but famous clarinetist is trapped by communists and pressed to become a propaganda mouthpiece. Instead he leads the dictators into the sky, revealing himself as the Pied Piper.
Reprints

Job Number
V-179
First Line of Dialogue or Text
In a lonely mining town back east, the deep, dark coal shafts are...
Genre
science fiction
Characters
Max Garr; Mr. Kellen
Synopsis
A mine foreman is concerned that a new robot may take his job, so he scrambles the wires in its control panel. When a cave-in occurs, the men outside contact the foreman by radio and tell him that the robot was not built to work in the mine, but as a safety measure. All he has to do to escape the collapsed tunnel is turn the robot on, but since he has sabotaged the robot's wiring, all he can do is desperately attempt to find the right connections by accident until his air gives out.
Reprints
Keywords
coal mine; robot