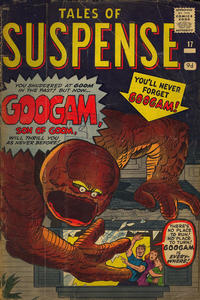 Beware of Googam, Son of Goom!! (Table of Contents: 1)

Job Number
V-155
First Line of Dialogue or Text
It was because of me that mankind encountered Goom!
Genre
science fiction
Characters
Googam (introduction, origin); Mark Langley; Helen Langley; Billy Langley (introduction); Goom (flashback)
Synopsis
Goom leaves an offspring in a cave to complete his conquest, and he comes across the family of the scientist who was responsible for his father's defeat. Googam is defeated when the scientist's son challenges him to a game of tag and runs off towards a pool of quicksand and then climbs a tree. When Googam sees the quicksand he mistakenly assumes that it is only mud since the boy must have run across it. Googam only sees the boy hiding in the tree as he sinks into the quicksand.
Reprints

Job Number
J-707
First Line of Dialogue or Text
A babble of strange voices welled around Dr. Title's ears as he wandered along the...
Genre
fantasy-supernatural; spy
Characters
Dr. Title; Douglas Jenks
Synopsis
A government agent retrieves a classified microfilm stolen to be given to enemy agents, and is helped by a magic bridge.
Reprints
Keywords
Han-lo

There Is Something Strange about Mister Jones! (Table of Contents: 4)

Job Number
V-156
First Line of Dialogue or Text
Fog blankets the waterfront...
Genre
horror-suspense
Characters
Freddy Sykes; Davy Jones
Synopsis
A thug hears a man say that he has a fortune in his locker. He attacks him and tries to make him lead him there. His victim is Davy Jones, and he shows the thief his locker by drowning him.
Reprints

What Lurks in the Mountain? (Table of Contents: 5)

Job Number
V-157
First Line of Dialogue or Text
The Communists are cruel masters in a recently invaded land!
Genre
science fiction
Synopsis
A communist general demands that the lama tell him of the alien space ship that has landed for repairs. At first the lama refuses to allow the aliens to be conquered by the communists, but he relents after the general threatens to execute all the peasants. The soldiers march off to the mountain the lama has indicated, but after a fruitless search they conclude the lama must have been lying. Suddenly, the mountain begins to shake violently and the soldiers realize too late as it blasts off that the mountain was the space ship.
Reprints

This story is most likely meant to be set in Tibet. One of the aliens imagined by soldiers looks much like the later Ditko creation the Mindless Ones. Alterations in art are apparent on page two, panels 1, 3 and 5 (the villain was originally holding a gun or a whip); and page 3, panel 1, where the entire panel is redrawn, possibly by Sol Brodsky. Changes were likely made at the request of the Comics Code Authority. Story is pages 28-32 of comic (pages of story numbered 1 to 5).