The Lamp of the Three Wishes (Table of Contents) 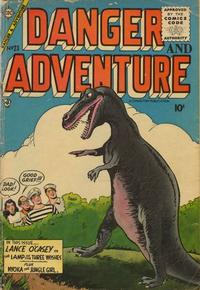 The Lamp of Three Wishes (Table of Contents: 1)

In reprinting this story, Charlton had to make editorial changes to satisfy the Comics Code Authority censors. Most changes to this particular story were minor, like the removal of some sound effect words. However, on page eight, where the giant Tyrannosaurus Rex makes his appearance, in the Fawcett original the dinosaur is holding two cavemen in his front claws. These cave men disappear in the Charlton reprint, although an errant splotch of black ink that was the rear end of one victim's loin cloth still hovers beneath the dinosaur's right claw.

The second page also contains a statement of ownership, management and circulation for This Magazine is Haunted.

That Wreck, the Hesperus! (Table of Contents: 4)

This is the only story with the "Skipper Hoy" feature.

The Gorilla Smugglers (Table of Contents: 5)

This is likely an unpublished Fawcett inventory story.