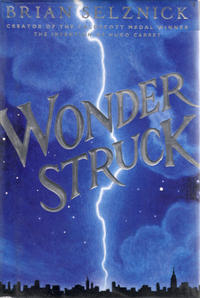 First Line of Dialogue or Text
Sooner or later, the lightning comes to us all.
Keywords
Lightning

Quote from A Lion Among Men.

Wordless story based upon the wolf diorama at the American Museum of Natural History.

Part One (Table of Contents: 6)

Genre
drama
Characters
Ben; Aunt Jenny; Uncle Steve; Robby; Janet
Synopsis
Ben, whose mother was recently killed in a car crash, is living with his cousins. When he overhears his aunt and uncle discussing selling "his" house, he slips back in by night to retrieve his carefully-arranged collection of treasures. Finding information that he suspects identifies the father of whom his mother never spoke, he dials a number in New York City during a thunderstorm. The line is struck by lightning, robbing him of his hearing.
Keywords
Deafness; family; hearing loss; lightning; Minnesota; orphan; thunder

Genre
drama
Characters
Rose; Lillian Mayhew
Synopsis
Deaf child Rose is obsessed with film star Lillian Mayhew, slipping away from her speech-reading tutor to see Lillian in "Daughter of the Storm." Afterward she sees that the theater will convert to sound, then is herself caught in a storm on the way home. She cuts up the speech reading book (and her father's newspaper) to make models of New York City landmarks. Packing a bag and taking the Mayhew scrapbook and a birthday post card signed "love Walter," she slips away and takes the ferry from Hoboken to New York.
Keywords
Deafness; hearing loss; Hoboken; lip reading; lip-reading; pantomime; runaway; silent movies; speech reading; speech-reading; wordless

Genre
drama
Characters
Ben; Jamie
Synopsis
Taking his box of treasures, Ben runs away by bus to New York City. The bookshop where he had hoped to connect with his father is gone, and he slips into the American Museum of Natural History, where he is enthralled with the wolf diorama set in his home of Gunflint Lake, Minnesota. A boy whose father works at the Museum shows him places to hide, and in searching old files on the diorama Ben comes across correspondence between his parents. Learning from Jamie (they communicate by notes) that the bookstore has moved, Ben sets off for the new location.
Keywords
American Museum of Natural History; deafness; diorama; hearing loss; New York City; orphan; runaway; wolf

Genre
drama
Characters
Rose; Lillian Mayhew; Walter
Synopsis
Rose slips into a Broadway theater to watch Lillian Mayhew rehearse, infuriating the actress, who turns out to be Rose's mother. Mayhew locks Rose in the dressing room until someone can get her home, but she escapes through a window and runs to the American Museum of Natural History, where she is overwhelmed by the huge Ahnighito meteorite and chivvied by guards. She hides but is found by Museum worker Walter, who turns out to be her brother. He takes her to his home where they spend a loving evening together, and he watches over her as she sleeps.
Keywords
American Museum of Natural History; Broadway; brother; deafness; family; hearing loss; meteorite; mother; New York City; pantomime; runaway; theater; theatre; wordless

Genre
drama
Characters
Ben; Rose; Walter
Synopsis
In the bookstore at last, Ben discovers the now-elderly Rose and Walter conversing in American Sign Language. She quickly recognizes him as the grandson whose existence she had suspected. Ben's father had died young, but had spent time in Gunflint Lake researching for work on the wolf diorama. She describes how her life had opened when she discovered Sign, and how she and her son had both worked on the Museum dioramas. She takes Ben to the huge World's Fair Panorama model of New York City, which she created and now maintains. She tells him of his father, and begins to teach him Sign.
Keywords
American Museum of Natural History; American Sign Language; Deaf; deafness; diorama; grandmother; model building; New York City; orphan; runaway; World's Fair

Genre
drama
Characters
Ben; Rose; Jamie
Synopsis
In 1977, the elderly Rose makes her way to the bookshop, where she recognizes Ben from articles he has from his father -- her son. She takes him by subway to Queen's Museum of Art where they watch night fall on the New York City Panorama. Later he watches night fall on the city itself, with memories of his mother but in company with his new-found grandmother and his new-found friend, and his first halting words in his new-found language.
Keywords
American Sign Language; Deaf; deafness; grandmother; hearing loss; model building; New York City; orphan; pantomime; Queens; runaway; wordless

Wordless story, except for occasional signs, posters, printed items and the like.

First Line of Dialogue or Text
This book is dedicated to Maurice Sendak.