On-sale date from copyright registration. On-sale date of November 10 in ad in Batman #3.

Cover based on the splash page of the fourth Superman story in this issue. 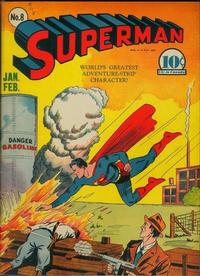 [The Giants of Professor Zee] (Table of Contents: 3)

First Line of Dialogue or Text
Greetings again, members! This time I want to talk to you on a subject that's of great importance these days--Loyalty.
Genre
superhero
Characters
Superman
Synopsis
Superman discuss the subject of Loyalty. There is a code message given in Code Mercury No. 1, a coupon for readers to join the Supermen of America Club, and a listing of the radio stations nationwide that air the Superman radio show.
Reprints

[The Pueblo Indians] (Table of Contents: 7)

Includes info on hummingbirds, the Pueblo Indians, Christopher Columbus and the bison.

[The Fifth Column] (Table of Contents: 9)

Genre
superhero
Characters
Superman [Clark Kent]; Perry White; Lois Lane; Frank Martin (death); Jeff Carlton (villain); General Sagdorf (villain, introduction); Eric Reibel (villain, introduction)
Synopsis
Warned by a friend of his of 5th Columnists landing by boat in the city of Metropolis, Clark Kent, as Superman, investigates and discovers that they are planting skilled workmen as spies and saboteurs with American armament factories, as well as having a secret base in a mountainous valley, complete with a subversive army capable of striking terror and destruction from the rear when U.S. military forces are attempting to defend coastal areas against foreign invasion.
Reprints

[The Carnival Crooks] (Table of Contents: 11)

Genre
superhero
Characters
Superman [Clark Kent]; Perry White (un-named); Lois Lane; Jackel (villain, introduction)
Synopsis
After Clark is fleeced at a local carnival, Lois is given permission by the editor of the Planet to get evidence of the crookedness of the games there and ends up discovering that the carnival also has pickpockets roaming the grounds, robbing the guests.
Reprints

[Perrone and the Drug Gang] (Table of Contents: 21)

Genre
superhero
Characters
Superman [Clark Kent]; Lois Lane; Sgt. Casey; Nate Grant (villain, death); John Parrone (villain, introduction); Brokenshire (villain, introduction)
Synopsis
Lois and Clark attempt to get the low down on thefts of morphine, as well as trying to prove the guilt of a lawyer who manages to get his clients freed in court on technicalities.
Reprints

Superman has a blue "S" on his cape.

I'll Help You Get a Daisy for Christmas (Table of Contents: 25) (Expand) /