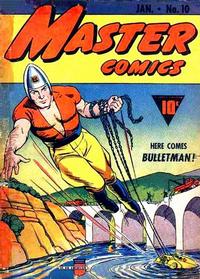 [The Monster of Djung] (Table of Contents: 4)

[The Mine Kidnappers] (Table of Contents: 7)

[The Sheepmen's Trap] (Table of Contents: 8)

Battefield is credited on pencils and inks in the Devil's Dagger story in Master Comics #8, and that art is similar to this story. The faces of the villains are exact matches, long chin, small eyes and long noses. Also notice the face in sideview in the Battefield scan on Jerry Bails' Who's Who from Target comics with pencils by Battefield, and from the same period.

[Drago and the Saboteurs] (Table of Contents: 9)