The Mystery of the Secret Tunnel? (Table of Contents) 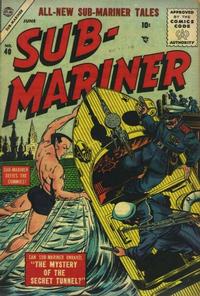 The Sub-Mariner and the Secret Tunnel! (Table of Contents: 1)

The Sub-Mariner Meets a New Enemy... Fire! (Table of Contents: 2)

Job Number
F-977
Genre
superhero
Characters
Sub-Mariner [Namor] (origin at age 16); Namora; Byrrah
Synopsis
Namor encounters fire for the first time while exploring Admiral Byrd’s abandoned Antarctic settlement “Little America” with Namora and Byrrah. While investigating one of the huts, Namora inadvertently knocks over a can of kerosene, sparking an explosion that engulfs the hut in flame. Byrrah flees, but Namor rushes into the blaze to rescue his cousin.
Reprints
Keywords
Antarctica

The Man Who Loved the Sea (Table of Contents: 3)

The Sub-Mariner and the Icebergs (Table of Contents: 5)