The Quest of Zorro (Table of Contents) 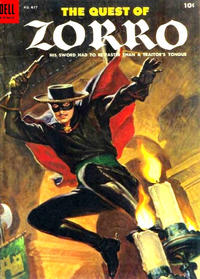 The Governor's Troops (Table of Contents: 1)

Inside front cover. Pencils and inks credits for this sequence from Alberto Becattini (May 14, 2007).

The Quest of Zorro (Table of Contents: 2)

Genre
adventure; historical; western-frontier
Characters
Zorro [Don Diego Vegas]; Bernardo; Don Alejandro Vega; Governor of California; Panchita Conchola; Don Vincente Conchola; The King; the King's Secretary (death); Esteban de Sevas (villain, new Governor, a coutier); Ribero (villain, agent of de Sevas); Duke D'Alordo (villain)
Synopsis
Don Diego is summoned hastily to the Governor's Palace and is informed by the Governor that he is soon to be replaced in that position by a coutier named de Sevas, who plans to come into that office and use his power to rob the land owners of their properties. Zorro, as Don Diego, sails to Spain to prevent the man from assuming that office and the power that goes with it. He soon discovers that he is being spied on by an agent of de Sevas and narrowly escapes death at his hands. Eventually, de Devas uses the King's own seal to proclaim himself Governor and thwart Zorro's plan to stop him.
Reprints
Keywords
Alta California; Anna Maria (a ship); Casa de Sevas; Castillo Diablo; Spain

For some reason, the writer now refers to Don Diego Vega as "Vegas".

The last 1/3 of page 32 is a publisher's promo for "To The Last Man", a new comic featuring Zane Grey's authentic tale of the old west. Cover is pictured.

Page 33 is found on the inside back cover and is printed in black and white, with page 34 appearing in color on the back cover.