The brand used on this cover ("A Dell Comic") was last used in 1952. It appears on this cover, apparently, because this issue reprints a comic (Four Color #413) from the time period it was used and the brand was not replaced with the then current one. 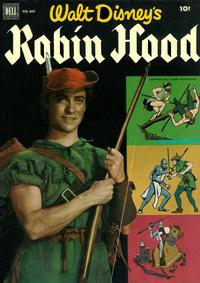 During the Reign of Richard the Lionheart ... (Table of Contents: 1)

Maid Marian Is Rescued from the Dungeon (Table of Contents: 3)