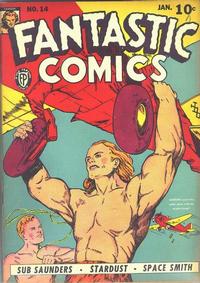 [The Raid on the Raiders] (Table of Contents: 1)

Genre
superhero
Characters
Samson; David; One-Eye Malone (villain, introduction)
Synopsis
Samson sets out to smash a spy ring which has set up a slave labor farm and sub factory, and finds it to be run by One Eye Malone, an ex-con who supposedly died in an attempted escape from Alcatraz.

[The Mystery of the Empty Graves] (Table of Contents: 2)

[Battle With the Black Baron] (Table of Contents: 3)

[The Songstress Spy] (Table of Contents: 4)

Genre
adventure
Characters
Yank Wilson; Rosita Velez (villain, introduction); Voss (villain, introduction)
Synopsis
Yank is assigned tracking down Fifth Columnists in Pernambuco, who have stolen classified plans. His snooping finds a connection between a murderous Spanish nightclub singer and a Prussian spy, and a murder weapon which is more than it seems.

The Riddle of Skull Rock (Table of Contents: 6)

[The Fifth Column Strikes [The Sixth Columnists]] (Table of Contents: 8)

First line of text reads: "Stardust, whose vast knowledge of interplanetary science has made him the most remarkable man that ever lived, devotes his abilities to crime-busting."

The Perils of Kobol (Table of Contents: 9)