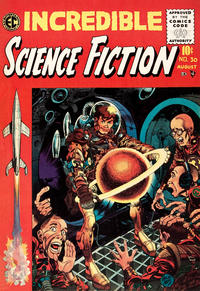 Genre
science fiction
Characters
X-17 crew members [Hollis; Captain McGraw; Enkers; Danton]; General Butler
Synopsis
The X-17 is set to become the first manned rocket to be launched from the Earth and the four-man crew was excited to become the first to reach another planet. To them, the distant stars looked like marbles. Then McGraw sends his first report: their target planet, Mars, seems to get smaller as they approach it, and Enkers donned a suit and went out and got it....it was the size of a rubber ball. And the other planets had similar issues like this as well. The General and assistants can't believe what they are hearing and deduce the crew has gone insane.
Reprints
Keywords
X-17

This story was inspired by "Mother", which appeared in "The Magazine of Fantasy & Science Fiction" in September of 1952.

Not Even a Sparrow Shall Fall... (Table of Contents: 7)