The Brave and the Bold! (Table of Contents)

Kanigher has stated in more than one interview (Comics Journal, Alter Ego) that he did basic layouts and wrote the copy for all of his covers. Logo design credit from Todd Klein via his Facebook page, used with permission. 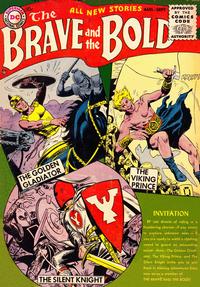 The Thunder of the Chariots! (Table of Contents: 2)

Genre
adventure; historical
Characters
The Golden Gladiator (intro); Praetor Clodius Crassus; Cinna (villain); Caius; Lucia; Crixus; Cotta
Synopsis
Marcus, a young shepherd, is grabbed and falsely accused of attacking a Praetor by the conniving soldier Cinna. Sentenced to a slave galley for life, Marcus becomes a muscled giant. He saves the crew from a loose lion by slinging his chain. He's sold to Cinna and handed to the gladiators and trained. He beats down hated rivals and rides a bull, despite sabotaged weapons from Cinna. He even wins the chariot race with only a shield. He's given the golden helmet and breastplate of the Golden Gladiator - but Cinna plots revenge.
Reprints
Keywords
chariot race; Gladiator; Rome; slave galley

1) Indicia is on the first page of this story. 2) Marcus's story echoes SPARTACUS, the 1951 novel by Howard Fast, which became the 1960 movie starring Kirk Douglas.

Battle for the Dragon Ship! (Table of Contents: 4)

Genre
adventure; historical
Characters
The Viking Prince; Captain Olaf; Gunnda; Sardluck (villain); Thorvald (villain)
Synopsis
A blond Viking is pulled from the water, but has no memory of his past. Gunna names him "Jon, the Shining, [after] the great Viking Prince of old!" But a spy knows him and reports to Baron Thorvald that "the youth" still lives. The spy threatens Jon's hosts, but gets a surprise as he fights with fish net, sword, and anything handy. Baron Thorvald comes in a dragon ship to capture him. The Viking Prince has himself shot from a catapult to tear the dragonship sail. He brawls with Vikings as Thorvald jumps overboard. Together they'll fight tyranny, as Jon seeks his lost identity.
Reprints

The Sea Rovers (Table of Contents: 5)

The Fighting Legions of Rome (Table of Contents: 7)

Genre
non-fiction
Synopsis
A short acount of how the Roman Legionnaires were organized.

Genre
adventure; historical
Characters
The Silent Knight; Sir Oswald Bane (villain); Sir Edwin Kent; Sir Grot
Synopsis
Sir Edwin Kent dies in a joust because Sir Oswald Bane sabotaged his lance. His son Brian, an orphan, cannot take the throne until he's a knight. Tough Sir Grot trains the boy relentlessly, but no one can handle the hawk Slasher. Squire Brian chases the hawk into the Forest Perilous and finds a suit of armor with a hawk emblem. He dons it just as knights try to seize a girl. Keeping silent lest he's exposed (as a mere squire, not a knight), he drives them off with Slasher's help. He leaves the suit hanging and finds everyone in the castle talks about the mysterious Silent Knight!
Reprints

Irv Novick often initialed his splash pages with a small colophon, a circle with "IN" or maybe "Irv" inside.