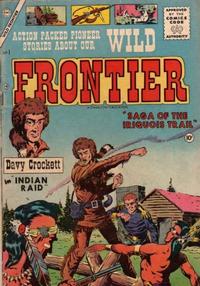 Title is spelled "Iriquois" on the cover, but correctly on the story itself.

During a fight at the end, the weapons used (tomahawks and knives) and some of the dialogue has been edited out of the black printing plate, but not out of the color plates, making the story look odd (see http://digitalcomicmuseum.com/preview/index.php?did=7047&page=30 for an example). Possible that the story was first printed elsewhere before the comic code, also possible that this is the never-distributed Feature Stories Magazine (Fox, 1950 series) #4 (The Iroquois Trail) which sometimes appeared behind the cover of Blazing Comics (Rural Home, 1944 series) #5.

First Line of Dialogue or Text
Suddenly one of the braves screamed in agony.
Genre
historical; western-frontier
Characters
Davy Crockett
Synopsis
Davy ends up having to shoot an apple off his son's head to prove he is a great man.

Day in the Woods (Table of Contents: 4)

Davy Crockett and the Angry Bear (Table of Contents: 5)

Genre
western-frontier
Characters
Davy Crockett
Synopsis
Davy feeds oatmeal to a baby bear that he thinks has been abandoned.