On-sale date from copyright registration. Ellsworth credit from statement of ownership.
This issue has variants: 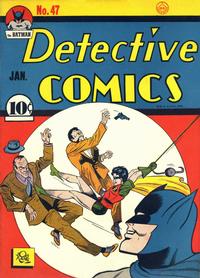 Kane forgets to add the bat to Batman's chest in many panels.

Co-inker Jerry Robinson signed his name as writer of a newspaper society column in panel 6 on page 5.

George Roussos snuck his last name onto a building front on the splash page.

The Case of the Ardent Actress (Table of Contents: 7)

[The Art Thieves] (Table of Contents: 8)

The Avenger is in costume and wearing a cape in this story.

First Line of Dialogue or Text
You know, boy and rug at the same time!
Genre
humor

Statement of Ownership (Table of Contents: 17)

Case of the Missing Eye! (Table of Contents: 19)