Beware the Giants! (Table of Contents) 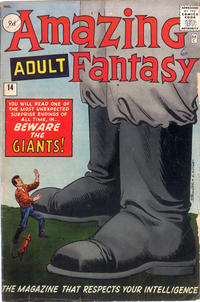 Beware of the Giants! (Table of Contents: 2)

Genre
fantasy-supernatural
Characters
Mr. Jann
Synopsis
An old man tells children stories of giants whom he insists actually exist. The adults of village think him mad, but the last panel reveals that old man is a resident of a Leprechaun village.
Reprints

Job Number
V-719
Genre
science fiction
Characters
Tad Carter (introduction, origin); Brad Carter; Mr. Filbert; Tobias Messenger (identified in X-Men: the Hidden Years (Marvel, 1999 series) #18)
Synopsis
A boy's early exposure to radiation causes him to develop powers. He is attacked when others learn of his powers, and suddenly is lifted into the sky by another far-off mutant, who contacts his mind and explains that he must live in hiding with other mutants until the world is ready.
Reprints

This story is often erroneously referred to as the first Marvel mutant story, the idea is used in earlier stories from their SF anthologies, for example "The Mutants and Me!" in Tales of Suspense (Marvel, 1959 series) #6 (November 1959) but also "Concentrate in Chaos" in Yellow Claw (Marvel, 1956 series) #2.

What Happened in the Wax Museum? (Table of Contents: 4)

Genre
fantasy-supernatural
Characters
Herr Wagner's statue
Synopsis
A thief attempts to rob a wax museum and is prevented from doing so by the wax figure of the museum's founder.
Reprints

Footsteps at Midnight! (Table of Contents: 5)

Genre
science fiction
Characters
Officer Jones; Molly
Synopsis
Conquering aliens who detest violence use fear as a weapon instead. They observe a policeman complaining about his lot in life and figure that he will aid them as he says he hates his job. When they approach him and attempt to intimidate him, the officer responds violently. The aliens flee the planet, not realizing that many humans grouse about their lot in life without being serious about what they say.
Reprints

Includes a letter from "Carl the Cat" in Greenwich Village. Stan Lee responds to a question about who edits the stories that Lee and Ditko do their own editing.

Ozarr, the Mighty! (Table of Contents: 7)

Genre
fantasy-supernatural
Characters
Bertha; Homer; Ozarr
Synopsis
A genie grants the wish of a nagging wife for genuine diamonds but she becomes paranoid about their theft, and so stays locked in her room all day guarding them, while her husband enjoys the peace and quiet.
Reprints