Journey into Time! (Table of Contents) 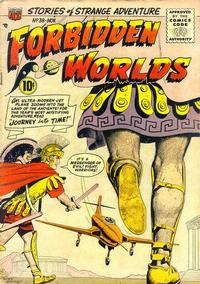 The Identical Twins! (Table of Contents: 1)

Genre
fantasy-supernatural
Characters
James Kelley; Howard Kelley; Alma Richards; Marv
Synopsis
James and Howard Kelley are identical twins that have an almost supernatural telepathic link to one another. One day James was spelunking in a cave and was trapped by a landslide. He then heard his brother calling out to him guiding him to the exit. After James was able to escape, he learned that his brother Howard had died and was guiding him to safety with mental telepathy from beyond the grave.
Reprints

I'll Protect Him (Table of Contents: 2)

Genre
fantasy-supernatural
Characters
Ed Conroy; Helen Conroy; Tommie Conroy
Synopsis
Ed Conroy loves his wife Helen and especially his son Tommie. Ed swore that no matter what, he would always look after and protect Tommie. Unfortunately Ed died in a car accident. Years later, Helen and Tommie were at the beach. Tommie swam out too far and nearly drowned but, according to the lifeguard, a mysterious man brought the child back to the beach safely. After describing how this man looked to the worried Helen she realized it was Ed!

Genre
fantasy-supernatural
Characters
John Mitchell; Portygee; Smitty; Undine
Synopsis
Looking for sunken treasure John Mitchell comes across a water spirit named Undine. She is willing to show John where the treasure is if he promises to take her away with him. He agrees. After he recovers the treasure, he then escapes. Undine comes looking for him to make him fulfill his promise.

Jim V. suggests that these are Sultan heads on another artist's bodies and speculates that this could be work which had to be "rescued" in order to be printable.

From Your Editor - To You! / letters page / 1 page (report information)

Genre
fantasy-supernatural
Characters
Marvin Hunter
Synopsis
Marvin Hunter is forced to detour through another road in the countryside by a policeman. During the detour he sees an injured girl who he then takes to the hospital. After going to her home he sees a picture of her late father. He was the policeman!
Reprints

Journey into Time! (Table of Contents: 6)

Genre
science fiction
Characters
George Denton; Tassandra
Synopsis
Its 1954 and George Denton is a test pilot who is flying a plane over the Himalayas. He crash lands in a land that looks like ancient Greece called New Athens. He finds that the locals there live like the ancient Greeks in content and in harmony. Time moves incredibly slowly there. After deciding that he would rather go back to his home then stay in this paradise, George leaves. When he reaches New York, he finds out how slow time moved in New Athens. For back in civilization it is now the year 2104!