The stories in this issue were all probably originally published by Harvey. However, this issue inherits more directly from Sweethearts Library (Magazine Management, 1957? series) #56. On each comic story page, 'SL56' is initialed in one of the panels. And the reformatting of the original stories used in that publication is repeated here.

There is no date listed anywhere in the issue. The date used for the index is based the back cover where the photograph of Christopher Plummer indicates he is 'currently appearing in "Stage Struck"'. That film was released in March 1958. 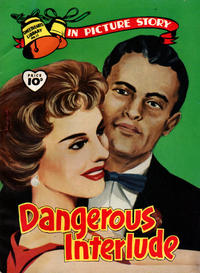 Genre
romance
Characters
George; Bill; Joyce Daily; Susie
Synopsis
During her spring vacation, Joyce takes the lake steamer on her way home from college and has a passionate night on deck with a man she had never seen before.
Reprints

I Lied to My Love (Table of Contents: 2)

Genre
romance
Characters
Tony Roman; Ann Drake; Marion Hall
Synopsis
Ann's father makes a fortune overnight in the heavy trucking business and is able to afford the most fashionable private school in the country for her. But Ann feels the need to lie about her pedigree to fit in with the other students.
Reprints

Genre
romance
Characters
Ted Horton; Francine Evans
Synopsis
After having a crush on the older Ted for years while growing up, Fran finally gets him to notice her as a woman when she gets older. However, after overhearing part of a conversation between Ted and her father, she believes Ted is only going to marry her to get a partnership in her father's business.
Reprints

The original Harvey version of this story is available online here: http://digitalcomicmuseum.com/index.php?dlid=13782. Some modifications to the art and text were made for the pocket-sized reprint.

Genre
romance
Characters
Jenny Deane; Doctor Rainer; Doctor Craig Temple
Synopsis
Jenny's father had been a great doctor and she wanted to be a nurse. But she lacks discipline and is sent to work at a free clinic. She falls for the doctor that works there, but wants her husband to be a famous Park Avenue doctor. Doctor Temple doesn't want to leave the free clinic and Jenny thinks she can force the issue by sabotaging a visit from the hospital inspection commission.
Reprints