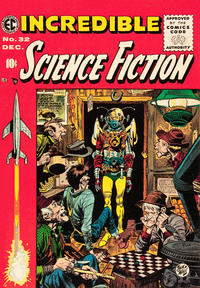 Food For Thought (Table of Contents: 4)

Genre
science fiction
Characters
un-named Captain; Mason (Biologist); Grock
Synopsis
An Earth ship returns to a planet that it had seeded over 50,000 years before in order to see if the planet is ready for colonization. They discover that somewhere along the line that evolution on the planet took a wrong turn and Earthmen could never thrive there. Thus they decide to start all over again and re-seed the planet after destroying it, unaware that an intelligent tree exists on the planet!
Reprints
Keywords
Operation Burn-Out

Krenkel drew and inked the majority of the large splash panel.

The Ultimate Weapon (Table of Contents: 5)

Genre
science fiction
Characters
Gurt (villain)
Synopsis
Gurt, after completing many conquests of a variety of planets in a dozen different solar systems with his crew, for the purpose of his home planet's colonizing it without opposition, now decides to take on a planet that does not seem to show any fear or signs of panic. That planet is Earth.
Reprints
Keywords
Mars; Nmenth (a planet)