[Groo vs. Conan: The Fray to End All Frays!] (Table of Contents) 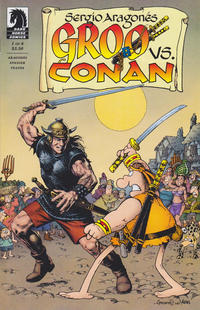 The "border" between Groo’s world and Conan’s world, which the venturous peasants cross, is expertly delineated with defining characteristics of each incongruously, but steadfastly, adjacent to one another on story page 5, panel 3.

The peasants comment on this phenomenon on story page 21, panel 3.
PEASANT 1: "Do you not notice how odd is the foliage? How it looks nothing like the lands we know?"
PEASANT 2: "Stranger and stranger..."

First Line of Dialogue or Text
Look, we tried to stop it. Honest, we did.
Genre
humor; sword and sorcery
Synopsis
Mark explains how they tried to stop, or at least postpone this series.
Keywords
background information