Popeye © 2014 King Features Syndicate
UPC code on back cover
This issue has variants: 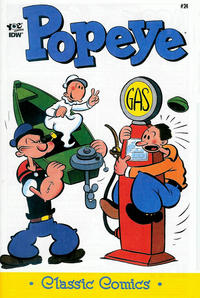 inside front and back covers

Hole in the Mountain! (Table of Contents: 3)

Genre
adventure; humor
Characters
Popeye; Swee'Pea; King of Caveolla
Synopsis
Swee'Pea falls asleep in his rowboat and drifts off to a hidden land at the end of the river where the king looks just like Swee'Pea. When Popeye arrives to rescue his son even he can't tell the two apart.
Reprints
Keywords
twins

Genre
children
Characters
Sherman
Synopsis
Sherman wants to win an auto race in his kiddie car but the reader has to help him out.
Reprints
Keywords
racing

several mazes are incorporated into the story