If I Were Batman! (Table of Contents) 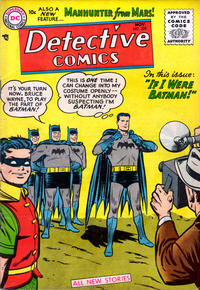 If I Were Batman (Table of Contents: 2)

Buzzy Asks: "Do You Know Your Neighbors?" (Table of Contents: 4)

The Money That Came to Life! (Table of Contents: 5)

First Line of Dialogue or Text
Hmm - This gym must be new around here!
Genre
humor
Characters
Casey the Cop
Synopsis
Casey responds to a cry for help from inside a gym.
Reprints

First Line of Dialogue or Text
Are you sure?
Genre
humor
Characters
Varsity Vic; Bill
Synopsis
Vic wonders why his friend Bill never has any money.
Reprints

Four Tricks of the Detective's Trade (Table of Contents: 10)

The Strange Experiment of Dr. Erdel (Table of Contents: 11)

Plot is similar to "The Galaxy Being", first episode of the original The Outer Limits television show. The show first aired on 16 September 1963. In it, Allan Maxwell, an engineer for a small radio station, somehow makes contact with a peaceful alien creature, who gets transported to Earth by accident.