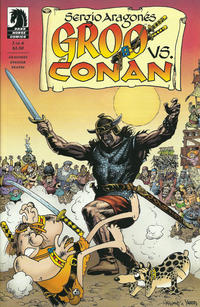 First Line of Dialogue or Text
Everyone has problems: Sergio and Mark are trying to save a comic book shop from extinction.
Characters
Groo; Conan; Rufferto; Conan's horse; townspeople (Groo's world)
Synopsis
Introduction and credits for the issue.
Keywords
credits; introduction

GREAT BIT: Three ordinary peasants from Groo's world comment on the spectacle of Conan and Groo entering the town, walking side by side:
--------------
PEASANT 1: "That is Conan, the greatest hero of all..."
PEASANT 2: "And he is with Groo, the greatest idiot of all!"
PEASANT 3: "If you average them out, you get me!"

Among the topics discussed: "Where does Groo go when I close the comic book?" and a comparison of Groo vs. Conan with 1966's "Mickey Mouse, Super Secret Agent" ( https://www.comics.org/issue/20458/ ) in terms of combining cartoonish type characters with realistic-looking ones.