[Mice on Ice] (Table of Contents) 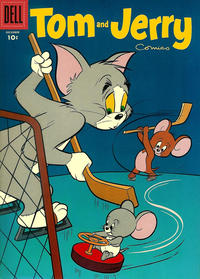 We Want a Harmless Daisy for Christmas! (Table of Contents: 1) (Expand) /

The last balloon of the final panel is lettered differently from the rest of the story. Possibly Harvey Eisenberg’s lettering in this balloon? Both this printing and its reprint display the same lettering inconsistency.

When looking for socks to hang on the mantle, Jerry declares: “The artist didn’t draw socks on me, Tuffy!” Referring to his diaper, Tuffy replies: “And this thing he puts on me won’t do to hang up!”. Such meta humor was less common in 1955 than it is today, and was virtually unheard of in the Dell Comics of the time.

Genre
anthropomorphic-funny animals
Characters
Droopy; old lady
Synopsis
For “Be Kind to Humans Week”, Droopy helps an old lady across the street. He should have stayed in bed.
Keywords
Good deeds

Just in Time for Christmas (Table of Contents: 13) (Expand) /