The Gorilla with X-Ray Eyes! (Table of Contents) 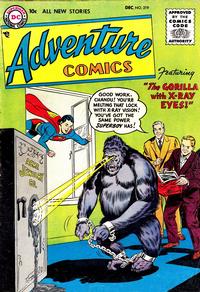 The Gorilla with X-Ray Eyes! (Table of Contents: 2)

Genre
superhero
Characters
Professor John Lang (incorrectly called Thaddeus); Chandu (intro); Lana Lang; Jonathan Kent; "Doc" Baird
Synopsis
Superboy rescues Prof. Lang from a big gorilla and captures it for an exhibition. But a canny crook notices the gorilla's eyes flash during lightning flashes, so deduces it has x-ray vision. They steal the gorilla to burn through walls and safes. Superboy can't stop it because he's weakened by the glare. Lang reveals it drank kryptonite-infused water in Africa. Superboy finally builds a giant battery to "defuse" the gorilla, and the effect wears off.
Reprints
Keywords
gorilla; kryptonite

1) Inker credit by Bob Hughes; also credited in the reprint. 2) Professor John Lang was incorrectly called Thaddeus in this story. In Superboy #37 it was established that Thaddeus is Lewis Lang's brother. 3) When this story was reprinted in Superboy #174, it was retitled "The Gorilla with Super-Eyes!" and Professor Lang's first name was changed to Lewis. 4) Early on, Superboy/Superman's x-ray vision was conflated with heat vision. Later DC were made them two separate powers.

Superman on Television! Is Super-TV (Table of Contents: 3) (Expand) /

The Greatest Show on Water (Table of Contents: 7)

Genre
superhero
Synopsis
Aquaman rescues a barge crew, but the amusement rides for kids are sunk. Aquaman reproduces carnival rides with an octopus-whip, whale-Virginia Reel, eagle-and-blowfish parachute jump, even a roller coaster with giant clam shells and a shipwreck!
Reprints

How a Nation Is Born: Your United Nations at Work (Table of Contents: 10)

Hunters with the Bow (Table of Contents: 11)

Genre
superhero
Synopsis
Prominent men with names like "Car King" and "Knight Hunter" are kidnapped, and thugs finally pinch Oliver "Queen". A chess genius uses them for a human chess game - as crooks hold guns. Speedy breaks in, he and Oliver fake a fight. Oliver shoots a fountain-pen arrow to black out cameras. They reveal the "chess genius" is an impostor who held is brother hostage to steal his fortune. The faker didn't twirl his mustache while contemplating a chess move!
Keywords
Chess; fountain-pen arrow

Green Arrow has a red hat.