One copy was given to retailers for ordering a certain amount of copies of the other editions as a Retailer incentive.

Each comic is individually numbered on the back cover. Although never confirmed by DC Comics, it is widely believed there were 10,000 copies printed numbered 1,000-11,000.

This contained all the same extras as the Memorial Set except the Black bag has a Silver bleeding Superman logo.
This issue is a variant of Superman (DC, 1987 series) #75 [Memorial Edition]. There exist further variants:
Keywords
Retailer Incentive 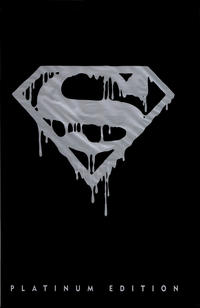 Story continues from Superman: the Man of Steel (DC, 1991 series) #19 and story continues in Justice League America (DC, 1989 series) #70. The last three pages are part of a 3-page glossed foldout.