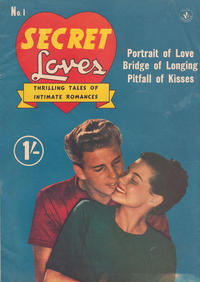 [A House You Can Really Build Yourself] (Table of Contents: 1) (Expand) /

Portrait of Love (Table of Contents: 2)

This is not the story of the same name from Secret Loves (Quality, 1949 series) #1 (November 1949), although this looks like a Quality reprint.

Pitfall of Kisses (Table of Contents: 3)

Bridge of Longing (Table of Contents: 4)

Scott Brady was a US film and television actor best known for his roles in western and crime films. His career began 1948. The film most likely in release at this time is "The Model and the Marriage Broker" (1951).

Robert Stack was a US movie and TV actor, best known for The Untouchables (1959–63). The film likely to be in release at this time is "The Bullfighter and the Lady" (1951). He also starred in the adventure epic Bwana Devil, the first color 3-D feature film produced in the US, which was released November 1952.