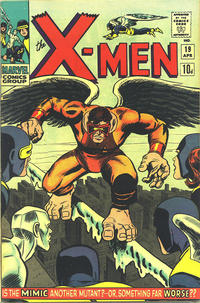 First Line of Dialogue or Text
Boy! One thing's for sure-- a Hawkeye I'm not!
Genre
superhero
Characters
The X-Men [Professor X; Cyclops; Marvel Girl [Jean Grey]; Angel; Beast; Iceman]; GUESTS: Zelda; Vera (first appearance); VILLAIN: Mimic [Calvin Rankin] (first appearance, origin)
Synopsis
Bobby and Hank tussle with mysterious Calvin Rankin, who beats them by mimicking their powers. Calvin then has an encounter with Jean at a restaurant. Realizing he is dealing with the X-Men, Calvin follows Jean home and asks to join them. Once he has absorbed all of their powers, he battles them and captures Jean. The team follows him to his hideout deep in an old mine. Mimic uses his powers to uncover a machine his father built that will allow him to keep the combined powers for good. Xavier allows Mimic to use the machine which doesn't give him powers but strips his mimic powers away.
Reprints