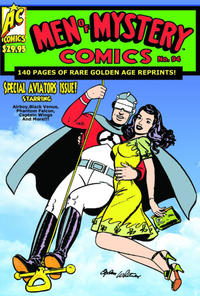 The Great Aviator Heroes of the Golden Age (Table of Contents: 2)

First Line of Dialogue or Text
Heroic figure of the airways of America...
Genre
aviation; superhero
Characters
The Skyman [Allen Turner]; Fawn Carroll; U.S. Army Major; Commander Innes; submarine commander (villain); submarine crew members (villains, one dies)
Synopsis
Skyman saves Fawn and an army major from being blown up in their launch by a torpedo. He is told that mysterious submarines have been preying on the U.S. Merchant Marine the past two months, but no ships are sunk; they just disappear in mid-ocean.
Reprints
Keywords
Atomatic; Fusileer; Fusileer belt; Paraly-Ray; Stasimatic; The Wing

The Fusileer is a weapon of Skyman's that uses a combination of cosmic, cathode and polar rays.

First Line of Dialogue or Text
Harvey Beecher dead! Wealthy inventor leaves riddle will!
Genre
adventure; aviation
Characters
The Phantom Falcon [Chet Horne]; Officer O'Leary; Kate Beecher; Commissioner Gordon; Carl Beecher (villain); Eric Beecher (villain)
Synopsis
Chet is approached by the two sons of the late inventor, Harvey Beecher, who fear for their lives from their sister, of all people, who supposedly desires the fortune of her late father. She allegedly has a clue that will solve her father's will, but it is actually Chet Horne who fools the Beecher brothers into thinking that he has solved the riddle secret of Harvey Beecher's will.
Reprints

First Line of Dialogue or Text
Oh! Oh! This looks like we're in for a bit of troubleshooting!
Genre
adventure; aviation; superhero
Characters
The Masked Pilot; Dwight Ellis (aviation designer); Tom; Karl Ellman (villain, engineer, death)
Synopsis
The Masked Pilot and Tom head for the aviation factory owned by friend Dwight Ellis, who has had a problem with his plane prints being traced. The Pilot discovers that one of the factory employees is the guilty party, then has to fight for his very life to subdue him.
Reprints
Keywords
Alaska; Army

First Line of Dialogue or Text
Evening in a London restaurant near the office of the Air Ministry...
Genre
aviation; superhero; war
Characters
The Black Angel [Sylvia Manners]; Jeff (pilot, death); Schmidt's wife; The Nazis [Lt. Schmidt (death); Hans; others un-named] (villains, some die)
Synopsis
Sylvia reads in the newspaper that the Nazis are crying foul over R.A.F. pilot Jeff bombing their schools and hospitals. But he denies that, claiming that photos of him attacking these targets were doctored. When the Nazis murder Jeff, the Black Angel steps in to square accounts.
Reprints

AC Comics claims the art in this issue was done by Mort Leav.

A Trip to Trouble (Table of Contents: 8)

Pencil credit from Bob Overstreet, agreed with by Bill Black.

An illustrated public service feature, requesting Americans to make an air defense notebook using these four illustrations. Page is divided into 4 equal sized panels, each one spotlighting an enemy aircraft silhouette, this time: the Mitsubishi 96 from Japan, the Junkers Ju 90 from Germany, the Focke-Wulf "Kurier" from Germany and the Mitsubishi "Obtori" from Japan.

First Line of Dialogue or Text
An R.A.F. fighter base---somewhere in England---!
Genre
aviation; war
Characters
The Flying Dutchman; Major Kurt Rausbeck (villain, death); Lt. Rausbeck (villain, Rausman's brother, pilot); Major Streeter (villain, pilot); The Nazis (villains, many die)
Synopsis
The Dutchman and Rausbeck have an aerial battle and the Dutchman wins, while Rausman dies. Cleverly, the Dutchman switches uniforms and planes so that Nazi forces believed that their hated enemy is dead. Now the Dutchman is flying with the enemy and causing destruction all along the way.
Reprints
Keywords
Kiel; R.A.F.

[Zombies of the High Llama] (Table of Contents: 12)

First Line of Dialogue or Text
Daily Report: Zenus Archaeology Society --
Genre
aviation; superhero; war
Characters
Sky Wolf [Larry Wolfe]; Sky Wolf's Band [Cocky-Roche; the Judge; the Turtle]; High Llama (villain, actually a Japanese in disguise, death); the Llama's zombie followers (villains, all die)
Synopsis
An archaeological society in 2985 A.D. discovers artifacts from the 20th century, including some movie film highlighting the exploits of Sky Wolf and his band in 1943. The movie shows fighting over the jungles of New Guinea and the capture of Allied pilots by the High Llama and his zombie followers. Through hypnosis the Llama compels the pilots to fight against British forces.
Reprints
Keywords
New Guinea; Zenus Archaeology Society; zombies

The last panel blurb gives the title of next issue's story: "Prince of Evil."

First Line of Dialogue or Text
In the silence of a secret hangar...
Genre
aviation; superhero; war
Characters
The Golden Eagle [Dennis Quinn]; Liberty (the Eagle's pet eagle); Moki [also as Stashu] (a native guide); Captain Anderson; The Japanese [Stashu; Tonga; Katoya; others un-named] (villains, some die)
Synopsis
Dennis is listening in on secret Japanese radio messages, all of which are meant to hinder the Allied invasion of the Japanese homeland. He sends his friend Moki to locate the radio station, which he does, and together with the Golden Eagle, Moki puts an end to the station and its crew.
Reprints

The Killers in Kunai (Table of Contents: 14)

Genre
aviation; war
Characters
Captain Aero; Chop Suey (Aero's Chinese pal); Jenkins (Corporal of the Guard, Post No. 6); Sam; Imperial Japanese Air Force Commander (villain); The Japanese (villains, many die)
Synopsis
Captain Aero doesn't think that his night guards are crazy when they see and shoot at large, hairy beasts, especially when he comes face to face with them himself. Then they discover that Japanese soldiers are inside of the cleverly woven Kunai grass outfits.
Reprints

Illustrated feature of the Lockheed P-38 Lightning and all of its capabilities.

Original copyright information on the masthead reading "Copr., 1942, by The Wander Co." was removed in this reprint.

First Line of Dialogue or Text
Captain Wings, secret agent and US army air ace, smashes into the heart of Tokyo [...]
Genre
aviation; war
Characters
Captain Wings [Captain Smith]; Sue; Mickey; Commander Rogers; Stella Ruben; Jewel (villain, Stella's servant); Nazi Officer (villain); Japanese Minister of War (villain); The Japanese (villains, some die)
Synopsis
Captain Smith is ordered to go with Commander Rogers in his plane-carrying submarine and then be dropped 100 miles off the Japanese coast. He meets Stella Ruben and together they head to Tokyo to kidnap the Japanese minister of war.
Reprints

AC Comics credits Max Elkan as the sole artist for this story.

First Line of Dialogue or Text
It is night, and we are a great airport...
Genre
adventure; aviation; superhero
Characters
Airboy [David Nelson II]; Tex Calhoun (industrialist); Sven; Cathy Collins (Rick Merrill's fiancee); Captain Rick Merrill (pilot); Arnold Stark (villain, Rick's twin cousin, death)
Synopsis
Industrialist Tex Calhoun is sponsoring a test flight, but has chosen another pilot to make the test instead of Airboy. But when he shows up late, heavily clothed and not wishing to speak to anyone or allow anyone near him, Airboy smells a rat, and checks his apartment, where Rick is found wounded. Airboy jumps in Birdie and heads out to chase down the pirated plane, flown by Rick's twin brother. He forces the pilot down and a long stand-off occurs before death finally wins out.
Reprints
Keywords
Birdie

First Line of Dialogue or Text
Wing is in Europe when the war breaks out, and all American are ordered home...
Genre
aviation; war
Characters
Wing Turner; the Nazis (villains)
Synopsis
Wing is assigned the task of manning a plane over the u-boat infested waters of the North Atlantic, looking for the periscopes of submarines. He spots one and heads into the air to coordinate his ship's torpedo attack. When the torpedo hits the sub, Wing's plane's rudder is hit by flying shattered metal and crashes into the ocean, becoming fair game for the Nazis.
Reprints
Keywords
Havre (France)

First Line of Dialogue or Text
Cyril catches his foster father off balance...
Genre
adventure; aviation; war
Characters
Jenny; Cyril; Rick; Otto (villain)
Synopsis
Cyril is in trouble again and Jenny heads out to rescue him when a hurricane strikes and she is forced to return to base. After the storm, and fearing the bioy is lost, Jenny takes to the skies again and this time spots Cyril being menaced at sea by sharks!
Reprints