Editor from October 1, 1941 statement of ownership. Previously credited editor (Leon Harvey) unlikely as Harvey did not take over the title until #18 (as Family Comics, Inc.). 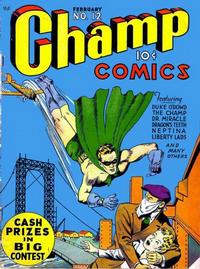 [The Traitorous Politician] (Table of Contents: 1)

[King of the Sedahians] (Table of Contents: 2)

The Case of the Phony Bearded Boogieman (Table of Contents: 3)

The Mystery of Lobster Claw Island (Table of Contents: 5)

Notarized 14-10-1940.
Leo Greenwald signs this as "Leo Greenwald, Publisher", but the statement just gives Worth Publishing Co., Inc. as the publisher and Greenwald as the editor.
Address for both Greenwald and Worth Pub. Co., Inc. is:
122 East 42nd St., New York City

Note that this issue is published by Champ Publishing Company at a different address. All previous issues were published by Worth Pub. Co., Inc., edited by Worth Carnahan, so this issue captures various stages of the transition. The SOO would almost certainly have been sworn to before the indicia was typeset.

[Escape From Boston] (Table of Contents: 7)

[Moon Priestess of the Aztecs] (Table of Contents: 9)

First Line of Dialogue or Text
Can you spare a match, buddy?
Genre
humor

[The Message of Mama Three-Bears] (Table of Contents: 11)

The Case of the Missing Overcoat That Wasn't Missing (Table of Contents: 13)

First Line of Dialogue or Text
This time, Akim, I wish to go alone, but we shall be two!
Genre
fantasy-supernatural; superhero
Characters
Dr. Miracle; Dr. Resdale (introduction, villain); Duncan (dies); Doris Resdale; Jenssen; Herlock Sholmes (a ghost detective)
Synopsis
Dr. Miracle solves a murder, taking on the form of his servant Akim to throw off the suspects.
Reprints