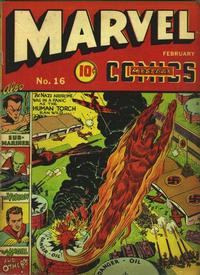 [Pinhead and His Underworld Army] (Table of Contents: 1)

Genre
superhero
Characters
The Human Torch [Jim Hammond]; Mayor Hawkins; Pinhead (villain, introduction, death); Wickedkop (villain, introduction); Mike (villain)
Synopsis
The mayor informs the Torch that 5th columnists under a man named Pinhead have entrenched themselves in the city. He wants the Flaming Fury to head up a new branch to deal with undesirable elements: the Suicide Squad!
Reprints

Plot crossover w/the Sub-Mariner story; continued next issue. At the end of the story, the editors inform readers that Marvel Mystery #17 will feature a Torch-Namor team-up, as well as a color, autographed cover reproduction of the Torch on the backcover. Last note added by Craig Delich 2009-8-4.

Genre
superhero
Characters
The Sub-Mariner [Prince Namor]; Luther Robinson; Lynne Harris; Herr Kopf (villain, introduction); Heinrich (villain); Wilhelm (villain); the Nazis (villains, some die)
Synopsis
Namor, Luther and Lynne head for the coast of France, hoping to turn the tide of the war. They discover the Nazis are building a massive tunnel underneath the ocean through which they plan to invade Britain and destroy it. They learn that the Japanese also have such a tunnel and Namor decides to call the Torch into the fray.
Reprints

Plot cross-over with Human Torch story; continued in next issue.

Writer revision from Steve Dahlman to ? by Craig Delich 2009-8-4. The Who's Who lists NO specific writer for this strip.

Genre
adventure
Characters
Larry; Nick; the Nazis (villains, some die)
Synopsis
Although the British government has ordered two R.A.F. pilots to ground their strange new aircraft, they disobey and use it to attack and defeat the enemy.
Reprints

[Statement of Ownership] (Table of Contents: 5)

First Line of Dialogue or Text
Barney Bailey, prominent showman, astounds his world-wide public with the most unique circus ever viewed by a moderen audience!
Genre
superhero
Characters
The Vision [Aarkus]; Barney Bailey (circus showman, death); Matt Carson (Bailey's press agent)
Synopsis
The Vision battles prehistoric creatures that are part of a traveling circus that have escaped, frightened by a storm.
Reprints

Genre
jungle
Characters
Ka-Zar [David Rand]; Zar (a lion); Pindar (an eagle); Trajah (an elephant); Rajah Sarput (villain, death)
Synopsis
Arriving back in the Belgian Congo, Ka-Zar and Zar learn of an evil man killing the animals of the jungle, and the jungle king vows to stop him at all costs.
Reprints