[Groo vs. Conan: The Fray to End All Frays Ends, as All Frays Must!] (Table of Contents) 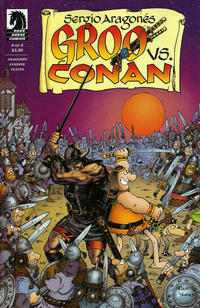 First Line of Dialogue or Text
If you haven't been following the story to this point, don't even try it.
Characters
Groo; Conan; Rufferto; Conan's horse; townspeople (Groo's world)
Synopsis
Introduction and credits for the issue.
Keywords
credits; introduction

On page 20, Thomas Yeates illustrates Conan crossing the “border” to return to his own world with a magnificent long-shot of Conan and his horse crossing a stone bridge over a placid river, surrounded by beautifully detailed, realistic-looking trees and foliage… But, at the far lower left (one could even say almost “in the margins”) Sergio Aragonés sticks-in a small gathering of “Groo-world lizards” atop a “Groo-world rock” observing the majesty of Conan’s crossing - as if to send him off.

Letters from: Mike Nuessler, Tom Cherry, Donald Schuldt, Travis Pelkie, Captain Nathaniel Jaime, John Prenis, Jason Pigg. The next Groo limited series is revealed. It is not (yet) "Groo Meets Tarzan", which will appear in 2021, but the twelve-issue "Groo: Friends and Foes" (2015).

[Having Spots Doesn't Make You a Dalmatian!] (Table of Contents: 4)