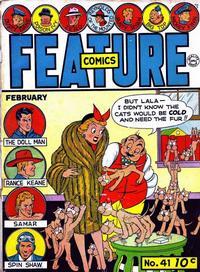 [The Captured Cubs] (Table of Contents: 5)

John Charles, as used at Quality Comics, was a house name used for multiple writers. It is not the UK writer John Charles who started his career in the 1990s.

[War In Volcania] (Table of Contents: 7)

[Sacrifice to Moloch] (Table of Contents: 9)

In this story, Zero performs an incantation by drawing a circular pattern -- or zero -- that transports him into the past and which also summons ghosts.

Genre
adventure; superhero
Characters
The Ace of Space [Ace Egan]; a gang of spies (villains, introduction)
Synopsis
Ace becomes a Lieutenant in the Army Air Corps and goes after a group of spies that have seized a new flying fortress, recovering the plane. However, an injury to the left arm, suffered by the Ace of Space during the skirmish, is noted by the base Major to Egan's left arm, and the hero's secret becomes known.

[Battle with the Giants] (Table of Contents: 11)

most of this story is Reynolds's dream

The Black Raider (Table of Contents: 12)

First Line of Dialogue or Text
Is your Uncle Phil really mad at Houlihan?
Genre
humor

[The Theft of the Plane Plans] (Table of Contents: 16)