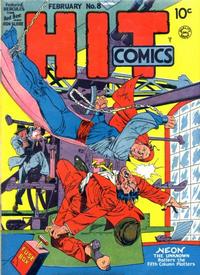 [The Power-Stealing Tower] (Table of Contents: 1)

Genre
superhero
Characters
Hercules
Synopsis
A crime syndicate builds a giant tower that will drain the power from every dynamo in America. They believe only Hercules can stop them, so they resolve to kill him.

[Broadcast of Crime] (Table of Contents: 2)

[The Haunted House of Spies] (Table of Contents: 3)

[The Forester's Vengeance] (Table of Contents: 5)

[The Lost TORNADO] (Table of Contents: 6)

[Battle with Blitz] (Table of Contents: 8)

[The Hungry Ghost] (Table of Contents: 9)

[The Monkeys Muscle In] (Table of Contents: 10)

The Stolen Name (Table of Contents: 11)

It's a good bet that Blum did the art on this story as the only other artist known to have done it was Lou Fine in 1941 and his style is easily recognizable. Added by Craig Delich 2013-10-10.