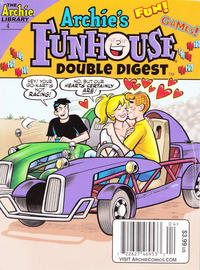 The Real Moose (Table of Contents: 5)

Genre
teen
Characters
Archie Andrews; Chuck Clayton; Dilton Doiley; Wendy Walters
Synopsis
Archie is afraid to enter a glass store to ask the girl that works there out as he thinks he will accidentally break the merchandise.
Reprints

The Right Height (Table of Contents: 8)

Cover Reprint used as the title page for the next section featuring the next installment of the Archie World Tour story.

Our Girl in Rome -or- Something Swiss Is Amiss (Table of Contents: 10)

Find the names of the girls on Archie's dance card.

Watch the Birdie (Table of Contents: 19)

Genre
teen
Characters
Archie Andrews; Reggie Mantle; Veronica Lodge
Synopsis
Reggie is supposed to be bird-sitting his neighbor's pet parrot but he gets Archie to do the job.
Reprints
Keywords
parrot

In Archie's Pals 'n' Gals #195 the script for this story is credited to Rich Margopoulos. Lorraine was also originally called Debbie in that issue.

Genre
teen
Characters
Archie Andrews; Jughead Jones; Merlin; Betty Cooper; Veronica Lodge
Synopsis
Archie tries to impress everybody with magic shoes that a magician gave him. These shoes make him very fast, but everyone he talks to tells him to slow down and see the good things in life.
Reprints

Genre
teen
Characters
Archie Andrews; Jughead Jones; Veronica Lodge
Synopsis
Archie gets a job delivering pizzas and begins to suspect that one of his customers is planning to rob the bank.
Reprints
Keywords
FBI

Mirth and Mayhem (Table of Contents: 24)

Unscramble the phrase to learn what Reggie has been up to today.

Genre
humor; teen
Characters
Moose Mason; Midge Klump
Synopsis
Midge uses a new perfume to get Moose in a romantic mood, but he has a headcold and can't smell anything.
Reprints

My Friend Erma (Table of Contents: 34)

Genre
teen
Characters
Dilton Doiley
Synopsis
Dilton meets a girl who is jogging and decides to take up exercise in an attempt to get to know her better.
Reprints

Unscramble the message to find out what makes Mr. Lodge happy and Veronica sad.