Boldman wrote the cover gag in the form of a cartoon. 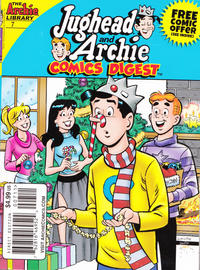 Genre
teen
Characters
Betty Cooper; Veronica Lodge; Jughead Jones; Archie Andrews; Reggie Mantle; Pop Tate; Chuck Clayton; Nancy Woods
Synopsis
Jughead has no money so he tells his friends what his fantasy gift to them would be for Christmas if he had money.
Reprints
Keywords
Christmas

The Real Thing (Table of Contents: 5)

You Never Listen! (Table of Contents: 6)

Genre
humor; teen
Characters
Archie Andrews; Veronica Lodge; Jughead Jones; Mary Andrews; Reggie Mantle; Dilton Doiley; Moose Mason; Betty Cooper; Pop Tate (cameo); Tomoko (cameo); Chuck Clayton (cameo); Nancy Woods (cameo)
Synopsis
Veronica complains that Archie doesn't listen to her, which of course he doesn't. But when a mysterious Christmas present shows up at his house, Archie takes the present to Pop's to get opinions on whether he should open it early or not.
Reprints

Decode the message to find out what Veronica is thinking after Jughead hit her with a snowball.

Mystery of the Missing Marble (Table of Contents: 12)

Ad for Plants vs Zombies minimates.

Genre
humor; teen
Characters
Jughead Jones; Archie Andrews; Reggie Mantle; Betty Cooper; Veronica Lodge; Waldo Weatherbee; Geraldine Grundy
Synopsis
Jughead and the guys try an experiment to demonstrate that if they laugh for no reason, the people nearby will think they're the ones being laughed at.
Reprints

First Line of Dialogue or Text
Thanks for waiting, driver!
Genre
teen
Characters
Jughead Jones; Archie Andrews; Hot Dog
Synopsis
Jughead got up late and so did the bus driver, Hot Dog is in the grocery story and Jughead meets a new soda jerk.
Reprints

Bill Yoshida is credited as the letterer in this digest but the lettering was done by Al Hartley.

The Statue (Table of Contents: 23)

Real or Unreal (Table of Contents: 25)

Rhythm and Blues (Table of Contents: 27)

Professor Jughead Lectures on How to Dig the Work Gig (Table of Contents: 29)

Illustration used as the title page for the next section featuring That Wilkin Boy reprints.

That Old Feeling (Table of Contents: 32)

Council of War (Table of Contents: 33)

Genre
teen; humor
Characters
Hot Dog; Jughead Jones; Scruff; Mrs. Wessel
Synopsis
Hot Dog decides to share some of his extra toys with other pets in the neighborhood and also finds a good home for a stray.
Reprints
Keywords
Christmas

The Night Before Christmas Dinner (Table of Contents: 37)

Genre
teen
Characters
Jughead Jones; Reggie Mantle; Pop Tate; Archie Andrews; Hiram Lodge; Betty Cooper; Moose Mason; Dilton Doiley; Veronica Lodge
Synopsis
Veronica has Jughead make a Christmas meal for the gang but when he finds out that Mr. Lodge's caterer is on strike and a orphanage will go without a Christmas meal he donates everything to the orphanage.
Reprints
Keywords
Christmas

[Subscribe to all your favorite Archie comic books today!] (Table of Contents: 38) (Expand) /