This is a free promotional book given to children by the American Cancer Society to help raise awareness about the dangers of smoking.
This issue has variants: 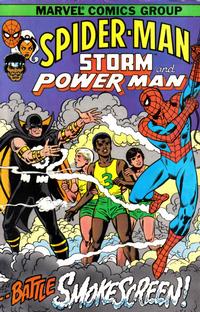 Spider-Man, Storm, and Power Man vs. Smokescreen (Table of Contents: 2)

Genre
non-fiction; superhero
Characters
Spider-Man; Storm; Power Man; Bret, a track runner; Carol, his girlfriend; Smokescreen; various thugs; unnamed teachers and students
Synopsis
Spider-Man, Storm, and Power Man help a young track runner stop smoking and defeat a villain named Smokescreen. Smokescreen is trying to get athletes hooked on smoking, then betting against them, knowing that their smoking will prevent them from winning any meets.

Art credits per Nick Caputo, February 2020. No credits are listed in story.

Information on the hazards of smoking.

Back cover includes illos of Storm, Power Man and Spider-Man and facts on smoking hazards provided by the American Cancer Society.