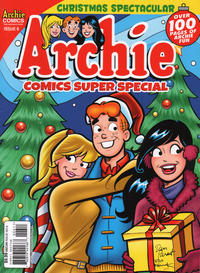 Give (Table of Contents: 1)

Includes a small illustration from each story.

A Christmas Tale (Table of Contents: 5)

Genre
adventure; teen
Characters
Archie Andrews; Betty Cooper; Veronica Lodge; Reggie Mantle; Jughead Jones
Synopsis
In the spirit of giving, the boys decide to cut down a huge Christmas tree to be filled with presents for the needy. Veronica promises a whole month of exclusive dates to the boy who cuts down the largest tree. Archie and Jughead are working together so Archie can be the winner, while Betty and Reggie work together to stop them and to get the biggest tree so Reggie can be the winner.
Reprints
Keywords
Christmas

The Surprise Presents (Table of Contents: 6)

'Tis the Season For ... Extreme Decorating (Table of Contents: 7)

A Job for Jingles (Table of Contents: 8)

Quiet on the Set (Table of Contents: 12)

Both DeCarlo and Lucey are credited for inks in separate credit listings. In the GCD credits for the original, Chic Stone was identified as inker.

Genre
humor; teen
Characters
Betty Cooper; Veronica Lodge; Archie Andrews; the Devil [Mr. Inferno]
Synopsis
Betty sells her soul to the Devil to gain Archie's affections, but it is revealed that Veronica did the same some time ago.
Reprints

The Unkindest Cut (Table of Contents: 14)

Characters
Veronica Lodge
Synopsis
Veronica, dressed in Christmas Elf costume, is admiring Christmas ornaments with the portraits of her friends on them.