Art revision from Lew to Sam Glanzman by Craig Delich. According to the Who's Who, the Glanzman's were brothers that worked on Amazing Man (Lew in 1940 and Sam from 1940-42). Sam often signed his artwork "Glanz" (such as on this cover), but Lew did not, again indicated by the Who's Who. This issue was cover dated March, 1941, and, barring any evidence extant to the contrary, this cover had to have been done by Sam, not Lew. 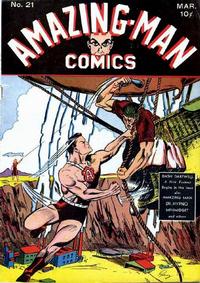 First Line of Dialogue or Text
Gifted with super-human strength and many mystic powers...
Genre
superhero
Characters
Amazing-Man [John Aman]; Zona Henderson (Aman's assistant); The Great Question (villain); Question's followers (villains); giant mechanical man (villain)
Synopsis
Aman and Zona head for the island of Martinez where an earthquake had occurred after strange ships were reported there. Unknown to them, the Great Question knows they are heading there and seeks to beat them to that location so that he can use a new type of weapon on Aman called the energy dome.
Keywords
energy dome; Martinez; Tibet

Art revision from Lew to Sam Glanzman by Craig Delich. The Who's Who indicates that Sam Decker was a pen-name used separately or in tandem by brothers Lew and Sam Glanzman. Sam is believed to have done the cover to this issue, as it is signed "Glanz", which Sam often used when he drew art and apparently Lew did not. Also the issue was published in 1941 after Lew had left the feature. The art on Aman also appears to be the same as the cover art.

First Line of Dialogue or Text
To prove their friendship for Kitty Myers and Tom O'Brien...
Genre
superhero
Characters
Minimidget; Ritty; Kitty Waters; Tom O'Brien; Biff Conners (mention only, death); James Morgan (villain, Tom's boss); Morgan's assistant (reformed villain, death)
Synopsis
Minimidget and Ritty agree to help Tom O'Brien, who has been charged with the murder of Biff Conners. Minimidget smells all the makings of a frame-up as it seems that Tom was given a package to deliver (which was empty) to the office, found Conners dead, and then was promptly arrested for murder.

The Who's Who does not indicate Kolb writing this feature, but Wikipedia indicates that he did.

The Case of Insane Mystic Knights of Bagdad (Table of Contents: 3)

Genre
fantasy-supernatural
Characters
Doctor Hypno; Gladys Glammer (actress); The Great Sultan (villain); Mystic Knights of Bagdad (villains)
Synopsis
Dr. Hypno is kidnapped at gunpoint and taken to see the Great Sultan, who has sedated an actress whom he wishes to have for a wife: providing the good doctor will perform brain surgery on her to insure that she will marry the Sultan.

First Line of Dialogue or Text
Halt!
Genre
adventure
Characters
Reef Kinkaid; Ahkmed (Reef's assistant); German Naval Commander (villain, death); German sailors (villains, all die)
Synopsis
Reef and Ahkmed are out sailing when they are suddenly attacked by a submarine, all over sealed orders from a foreign government discovered by Reef and sent off to Washington D.C..
Keywords
Venezuela

First Line of Dialogue or Text
Dash! What was it?
Genre
adventure; superhero
Characters
Dash Dartwell (introduction, origin); Dr. Drew Moss (Professor of Bio-Chemistry, introduction); Lois Moss (daughter of Dr. Moss, introduction); Coach Stone (of Dravrah University, introduction); Butch (villain, introduction); five un-named gangsters (villains, introduction for all)
Synopsis
Young Dash Dartwell, a scrub track athlete for Dravrah University, agrees to take Metalo-Tablets, invented by Professor Moss, a bio-chemistry teacher at the college, to see what effects it would have on the human body. When three of Dravrah's star track members are kidnapped by crooks, Dash is allowed to participate in the Elay Relays and sets three world records in three events, and culminates the day by capturing the six dangerous criminals responsible for the kidnappings.
Keywords
Dravrah University; Metabo Catalyst; Sports Review

Interesting note: if one spells the names of the two colleges running in the relays backwards, you have: "Harvard" (Dravrah) and "Yale" (Elay).

The signature, Harry Francis Campbell, signed on the splash page, is a by-line only for this issue. Campbell DID illustrate this story, in different form, in The Arrow #3, which is not a true reprint, as Taylor's illustrations in this issue are totally different from Campbell's work in The Arrow version. The captions have also, in most instances, been re-worded in The Arrow version, although the plot is basically the same. (notes added by Craig Delich)

First Line of Dialogue or Text
Recently the Mighty Man met up with a super-criminal called the Witch!
Genre
superhero
Characters
The Mighty-Man [Scott Pearson]; The Chemist; The Witch (villain); Witch's henchmen [Buff; other un-named] (villains)
Synopsis
Mighty-Man had been engaging a criminal for some time called the Witch, whom he always let go so that he could round up the minions who did her bidding. However he is puzzled when she suddenly drops out of sight, so he decides to investigate why she has apparently halted her criminal activities.

Genre
superhero
Characters
Shark (son of Father Neptune); un-named Governor; Doctor Von Snipe (villain, death, cameo); masked man (villain); Toag (villain)
Synopsis
The Shark looks into a strange situation: since the death of Dr. Snipe, there have been a number of ships and boats sailing into port without their men or cargos. He encounters a strange masked man whose weapon emits a gas that eats away the flesh of a person, but leaving the rest under contol of this master criminal.

Script revision from Humphries to ? by Craig Delich.

Two illustrated featurettes on famed animals that did amazing things.

Illustrated biography of Nostradamus and some of his predictions.