The Last Hunt (Table of Contents) 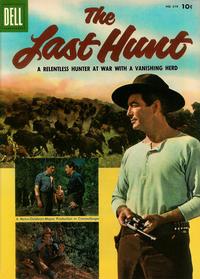 The Last Hunt (Table of Contents: 1)

Inside front cover; black and white. Five photos from the movie and a partial list of cast and credits.

Genre
western-frontier
Characters
Charley Gilson; Sandy McKenzie; Jimmy O'Brien; Woodfoot
Synopsis
When a buffalo stampede kills his herd of cattle, former buffalo hunter Sandy McKenzie reluctantly joins hunter Charley Gilson on one of the last buffalo hunts in the Northwest. The pair hire a half-breed boy and a peglegged old-timer as skinners and are successful in the hunt, despite the increasingly erratic and sadistic behavior of Gilson.

Story continues on inside back cover in black and white and concludes on the back cover in color. The last panel is Dell's "A Pledge to Parents." The name "R. Jenney" appears in panel one of page 7. Script, pencils, and inks credits for this sequence from Alberto Becattini (May 14, 2007)